Forum rules
Please DO NOT POST BUGS on this forum. Please report (and vote) bugs on : https://boardgamearena.com/#!bugs
Post Reply
2 posts • Page 1 of 1

I would like to initiate a discusion about a diceless variant game of Polis : Fight for the Hegemony.

My opinion is this game is very precise, technical and need to plan perfectly the management of Prestige points and ressources.
It seems very strange to allow a player to take a polis by just rolling a dice...
This game is like chess... do you think it's acceptable to roll a dice to try to get the queen with the rook ? I think no

For me this rule lead several problems :

Some players try to get level 3 city with hoplites in the first turn
--> they success ? they stay in game and have great advantage
--> they fail ? they play rapidely to loose the game and make another and try again
That leads to have games not interresting for both player...

For two players of the same level, if one of them fails 2 or 3 times the siege of level 2 city --> that will lead to probably loose the game for that player. Because this game suffers no error... specilly during the two firsts rounds...

I see on BGG that the author Fran Diaz had suggest an official variant solution to solve this issue :
https://boardgamegeek.com/thread/932507 ... ge-variant

After carfefully reads this variant I think his proposal seems not the better way because that will probably "break" the dynamic of the game. In few words the solution consists in take polis in the number of turn equal to city... So, statistical dice roll is converting in delay turns... I think this game can't work in that way but maybe I'm wrong...

The aim of this post is to initiate your opinions (with the participations of Fran Diaz).

My suggestion actually is based on the games I see on BGA. Here is my observations regarding polis siege : So based on these observations, we could try to write the requirements to keep the maximum initial game working :
My proposal : my proposal is based to the need of additionnal ressources/PP when polis is taken by hoplites. 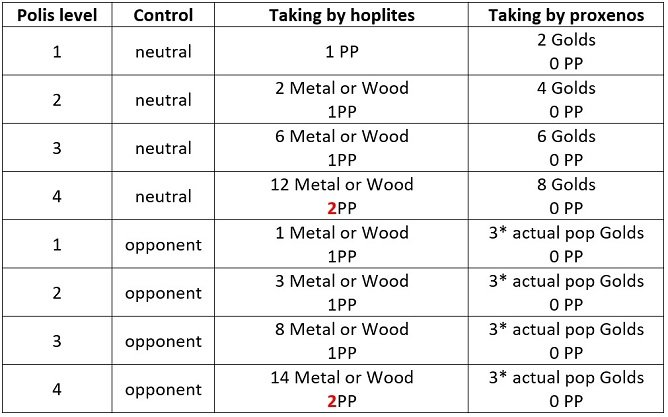 Any suggestions are welcome. Be constructive please, this is a serious topic, thanks for not trolling.

Re: Variant Diceless Siege of polis

The current siege rules doesnt fit the game.
I just started playing and this is what immidiately struck me.
It doesnt seem like we are getting any input from the community or the Designer?

Is the variant in the rules implemented?
Thats a slight imrovement.
Top
Post Reply
2 posts • Page 1 of 1

Return to “Polis: Fight for Hegemony”