Forum rules
Please DO NOT POST BUGS on this forum. Please report (and vote) bugs on : https://boardgamearena.com/#!bugs
Post Reply
5 posts • Page 1 of 1

No idea to whom this should be addressed to so I'm posting it here.
Most games on this site work great on a mobile device. However some tweaks are needed sometimes

In this game when playing on mobile there are two problems-
1. the rightmost cards are not seen
2. the boards of players on the right can't bee seen either

screenshot of a game with four players: 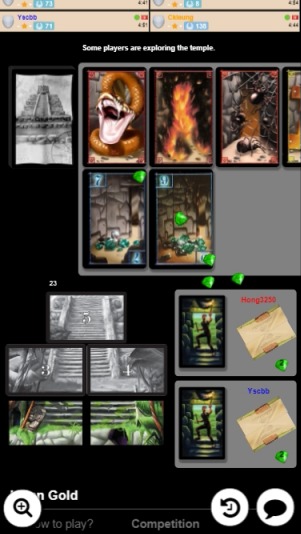 solution:
1. the area where cards are drawn should be made a little smaller when viewed on a mobile device
2. players should all be one below the other, as are the first two players that are seen on the screenshot
Top

I found this issue also.

You can use the Zoom In button then scroll to the right to see the other player cards, but it's a bit annoying.
Top

I don't play games on a mobile device, but it would seem logical to me that it should be turned to landscape because that's the view it actually has. Isn't there a way on the device to get that turned that way?
Top

It is 2020 feb and this issue still exists on mobile and i pad. I cant see anyones scores or mine sometimes...
Any plans to correct this?
Top
Post Reply
5 posts • Page 1 of 1