Since 2 weeks, you are enjoying a new mode on BGA: the Arena.

You are enjoying the new mode... a lot!

Statistically speaking, this is a huge success: you are more to play on BGA and you play more.

It also brought back to competition all the players who were at the top of the ELO ranking, and stopped playing for this reason. These players are very good, and it's great to have them back.

You gave us a very positive feedback on the Arena during our 48 hours survey: 87% of you liked this new mode, and even 38% said that the Arena mode was "perfect", which is very nice - but not entirely true.

The 3 problems we want to solve

However, we identified 3 points we need to improve:
_ we want to make it easy for players from the same leagues to match together.
_ we want to find a way to have a real competition for the least played games.
_ we want to reduce waiting time before Arena games.


In order to address this, we decided to move forward quickly, and to propose you a huge upgrade of the Arena mode.

We now that a change may be confusing because the Arena has been released only few days ago, but there is no reason for us to wait: Arena Season zero is a BETA, and we'd like to take advantage of this BETA step to test new things.

You may have notice that the 3 points above concern the realtime Arena lobby. Thus:
The main change concerns the Arena Real-time lobby. 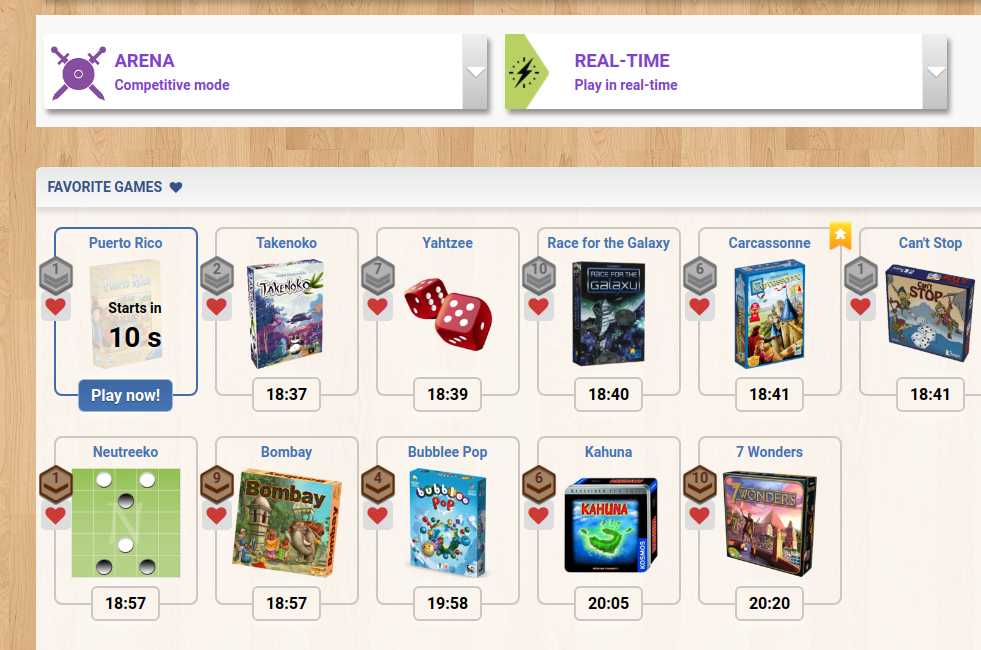 By giving a "meeting time" to everyone, we make sure that at this time, there will be enough players together in the lobby waiting for a specific game. And this is fixing the 3 problems of the current Arena: Arena sessions details

To participate to an Arena session, you have to be online on the lobby at the time indicated by the game.

Everyone have 1 minute to register to an Arena session. After that, a "matchmaking" is operated, and the games starts immediately (no need to confirm as everyone is there).

The timetables for each game is the same from one day to another, so you can remember it if you want.

It will happens that we couldn't find a game for some of you during a session, because there are not enough players or because of the game configuration (ex: 7 players available for a 2p game => 1 player won't have a table). In such a case, you will get a right-of-way so it is unlikely that it will happen again during your next session.

We hope to release this upgrade in February.

Some of you may found that this idea is weird: why should I wait a given time if there are players available in the lobby?

However, we thought the benefits are superior: yes you have to wait, but you know exactly at which time your game is going to start, even for the less popular games, and you'll get good opponents so every Arena game can be a real challenge.

And remember: Arena mode is optional: if you prefer the "old fashioned BGA", the "Simple game" mode is still there

What is the percentage of arena games vs normal games being played?
Top

Excellent idea! Sure some kinks will need worked out, but I think this is a really good step.

Game length should play a role in time between sessions. Using the distributions of real time game lengths could be useful. For example if the data shows 90% of lost cities games are over in 4 minutes with an average time of 3 minutes, a 5 minute between game session would be ideal...so people can play multiple games without significant waits in between (whereas 10 minutes between start times for a 3 minute average game leaves 70% downtime).

For longer but popular games, like Terra Mystica, if 90% of games finish in 1 hr 25 minutes, 45 minutes would be a good interval (so that most players who want multiple games will finish their round in time for the round starting in 90 minutes). (Going every 90 could work too, but for popular games effectively having 2 overlapping sessions would make a lot of sense...while more than 2 sessions would start to really hinder the matching algorithm due to smaller numbers...again something to work out number of overlapping sessions would be a function of game popularity). Also these intervals could change as the season goes on, initially having smaller time frames (with more overlapping sessions) would work if everyone is starting at the same place (if EAS and level aren't reset between seasons then this isn't really the case).

Another question would be how things work with premium games and where the premium users factor into the matching algorithm. Do you do matching as normal then after check if a premium game has a premium user and if they do it starts and if not it doesn't. Trying to maximize number of games by splitting premium players up seems counter to a good match making algorithm, so I'd lean towards making best matches first, then if game can't happen those players get a message they were unable to find a game b/c they weren't matched with a premium user....just some food for thought.
Top

I am wondering why Season ends after a few months and all players rank reset.
Strong players have to repeat dull games and average plays may not reach Elite league.
I think that active players would like the termless league of standard ELO rank.
Top

This is an excellent idea!

We don't have to wait Long queues and be able to response in 2 minutes, and we get opponents closer to our skill level as well.
Top

Thanks for your feedback.

We "froze" the Arena during 48 hours last week. A survey about the Arena was in the Arena space, and 3318 of you participated: thanks for this great feedback!


sprockitz wrote: ↑
30 January 2020, 23:58
Game length should play a role in time between sessions. Using the distributions of real time game lengths could be useful.

For now we are using Arena statistics, and we set the time between sessions to make sure there will be enough players in each session to make a meaningful matchmaking. This is not an exact science: we will try, learn, and then modify them until it is okay.


sprockitz wrote: ↑
30 January 2020, 23:58
Another question would be how things work with premium games and where the premium users factor into the matching algorithm.

Everything is not decided yet, but we definitely doesn't want to make a less performant matchmaking because of Premium constraints.

This is not related to this upgrade, so I encourage you to read the "Why did you introduce this Arena mode" here: viewtopic.php?f=3&t=13890
Top

We "froze" the Arena during 48 hours last week. A survey about the Arena was in the Arena space, and 3318 of you participated: thanks for this great feedback!

RicardoRix wrote: ↑
30 January 2020, 19:27
What is the percentage of arena games vs normal games being played?

Thanks for trying things. Makes me feeling season 1 is gonna be perfect.

2 turn-based games per day sounds not enough to me, though.

I have a problem with the lobby since the release of Arena mode : the lobby tells me that my settings for turn-based Seasons games are invalid, and I should reset them. But I cant since there is an error when I click on the settings button. Somehow I can play one game once in a while. I reported this as a bug but Im not sure that was accurate.
Top

Since people will be looking at other sites while waiting, there needs to be something flashing on the taskbar when it is ready to start. I have wanted this for years as indicated in my profile. It happens almost daily here that someone leaves or waits longer when I am not continuously looking at the game waiting for players for 1 or 2 hours. This has wasted time for hundreds of people.
I think switching between Arena and Simple at the top of the page is fundamentally bad and a big time waster getting things set up for multiple games that require a lot of waiting. Arena should just be another box to click on the game down below.
Last edited by asd123321 on 31 January 2020, 17:21, edited 2 times in total.
Top
Locked
146 posts