Tichu players who cheat by privately communicating during play

Forum rules
Please DO NOT POST BUGS on this forum. Please report (and vote) bugs on : https://boardgamearena.com/bugs
Post Reply
50 posts

Re: Tichu players who cheat

Another day another pair of apparent colluding partners. This one is fairly straightforward and has all the conventional hallmarks of cheating: cards passed between partners complete bombs, straights, and other combos with a regularity that cannot be plausibly explained as luck or randomness. Review the analysis and draw your own conclusion.

Can you recommend an analysis tool that shows all four hands?
I just played against a team that knows each other and made several moves that make only sense if you know partner's hand.

For example as position 2 hitting the first king of the tichu on position 1 with dragon because you "know" you have no aces in team.
Or calling a tichu that relies on every ace taking the turn because you "know" partner has both dragon and phenix.
Or playing a weak straight instead of a pair of aces and finishing with straight because you know that your partner blocks the queens and straight is strong therefore.
Top

I saw the replay of the game in question and know the team you are referring to.

“For example as position 2 hitting the first king of the tichu on position 1 with dragon because you "know" you have no aces in team.”

This one happened because the person hitting the king with dragon wanted to play dogs to give lead to partner.

“Or calling a tichu that relies on every ace taking the turn because you "know" partner has both dragon and phenix.”

This Tichu call was one with 2 aces but it seems like the person knew partner had at least dragon because it was given during the card exchange.

“Or playing a weak straight instead of a pair of aces and finishing with straight because you know that your partner blocks the queens and straight is strong therefore.”

You mean playing the straight first and finishing with pair aces. This happens if a person doesn’t want to be bombed after playing pair ace 1st and then being left with straight.
Top

So far no ace got played from the own team. Usually you keep dragon and dogs and can assume your partner to have at least one ace.

The way the tichu got played is like knowing both animals are at the partner. Otherwise you would play QQQJJ and stay with 3 and A.
Top

When a game feels weird or opponents have seemingly improbable fortune in high leverage situations, it's easy to conclude that something sketchy must be happening. I agree with Teddy’s assessment of the three things you've discussed from from your game but will briefly explore what I think was your opponents' decision-making process for each. I've provided the move numbers in case you'd like to follow along.

smuuurfing wrote: ↑
09 September 2021, 13:54
… calling a tichu that relies on every ace taking the turn because you "know" partner has both dragon and phenix.

kayucheng (KU) passes Dragon to jackychans (JC) and gets 6 for straight, J for trips, and low singleton 3. She calls Tichu, knowing partner JC has Dragon since she passed it, and opens with 123456 (no wish). You play 56789T over, win the trick, and lead 5. KU wins this with A and leads 3, you play 8, and her partner JC plays A to win the trick and then Dog to return the lead to KU. KU then plays JJJQQ but your partner Brandonxie plays KKK22 to win the trick and lead a pair. JC ultimately wins the trick with KK and leads 7. KU makes Tichu by playing A.

KU playing A over 8 is the only questionable move in my view. Since her partner called and has apparent control, it often isn’t optimal to seize control and spend an A (that could help get a double victory) when the partner may still have an opportunity to dump a higher singleton on her turn. This also allows JC to regain the lead without having to spend her last A. That being said, some players prefer to get rid of Dog and see such a play as a net benefit (get rid of bad card and return lead to partner to play whatever they want at the opportunity cost of an Ace).

smuuurfing wrote: ↑
09 September 2021, 13:54
For example as position 2 hitting the first king of the tichu on position 1 with dragon because you "know" you have no aces in team.

KU and JC swap Phoenix and Dragon so both can assume it’s unlikely the other has a great hand, i.e., probably no aces. Your partner Brandonxie calls Tichu and opens with 123456. JC plays 456789, wins the trick, and leads 77. Brandonxie plays TT, KU plays KK, and Brandonxie plays AA to win the trick. Both KU and JC can now also assume that your partner must have another if not both remaining As since they know the call was made with neither Phoenix nor Dragon.

Brandonxie leads 4 (KU plays 5, you 7) and then plays K with only two cards left. KU could wait to play Dragon but if everyone passes, Brandonxie could have AA or QQ and go out. JC playing Phoenix over King isn’t a good option with two Aces out there. If she did, Brandonxie could play A and then KU play Dragon but it’s hard to set a Tichu when the caller only has one card left (in this case, likely a high one) and both Dragon and Phoenix have been spent on the same trick.

KU opts to play Dragon over K, securing the lead and passing it via Dog to JC, who only had 5 cards left and presumably a better shot to get out first than KU (46689TTJQ left). JC plays 5, Brandonxie plays J (one card left), JC plays K, and then Brandonxie plays A to get out first and make the tichu bet. All of this seems reasonable and can be explained as simply a failed effort to thwart the Tichu.

smuuurfing wrote: ↑
09 September 2021, 13:54
… playing a weak straight instead of a pair of aces and finishing with straight because you know that your partner blocks the queens and straight is strong therefore.

You call Grand Tichu. After pass, KU has 12256789TQQQAA—a good hand to set—and is before you in turn order. She plays Mahjong and wishes for A. Surprisingly, you have none and play J and JC is forced to play A. You win the trick with Phoenix and lead 44477. KU plays QQQ22 over you and is left with 56789T and AA pair.

You found it suspicious that KU didn’t play AA and then go out with the straight. It’s important to note that KU hadn’t seen any 3s, Ks, or red 89TJQKA at that point in the round, meaning there could be a bomb (if not two). KU can reasonably assume a bomb held by an opponent would be played on whichever combo is led since either suggests she’ll go out first if she retains the lead. In that situation, one would rather be left with AA rather than a worthless 6-card straight that never gets played and no high cards. Also, GTs often come down to singleton and pair tricks so AA is more valuable.

Both the wish and this decision suggest that KU actually did not know her partner’s hand since JC had 33, KK, and red 8QK, eliminating the possibility of any bombs and meaning a lead of AA was safe. In the end, there were no bombs or a higher straight so the outcome (going out first and setting your grand tichu) was the same no matter which was played first.

All that being said, this doesn't entirely rule out the possibility that your opponents were sharing information but I'm not seeing a compelling reason to believe that based on these three rounds.
Last edited by NeanderthalMan on 10 September 2021, 03:58, edited 2 times in total.
Top

How to Review Games

When replaying games, I’m usually not watching all plays in turn order from beginning to end. Instead, I’m looking for what cards were passed (or what 8 cards a player had when calling grand tichu). Here’s my process:

1. Find the game you wish to review and click View game replay button.

2. Right-click each Choose this player button and open them in new windows.

3. Arrange the windows so each takes up a quarter of your screen. 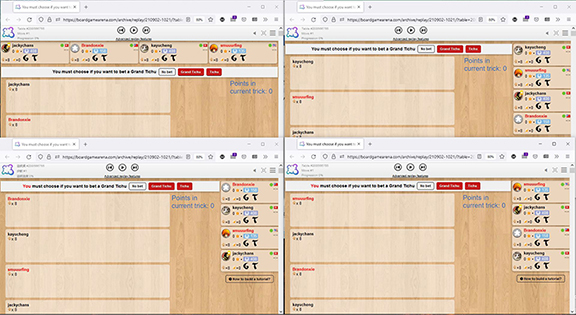 5. Press Ctrl+F and search for the word ‘last’ which is when the final 6 cards are dealt at the beginning of each round. 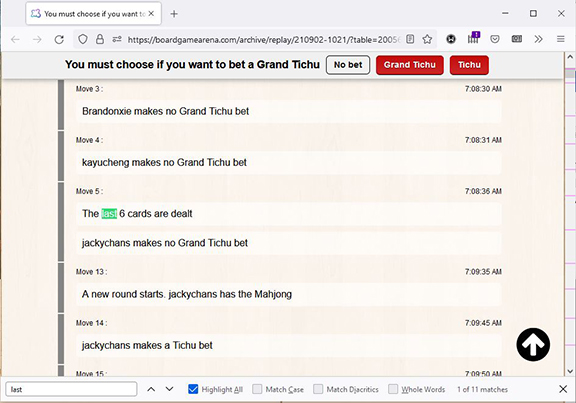 
7. In the header of each window, click the Advanced replay features link.


10. After clicking Ok, it will take a few moments for the replay to advance to the entered move number. Do this in the separate windows for each player. After reviewing, repeat step 8 forward for each move number (+4) on your list. 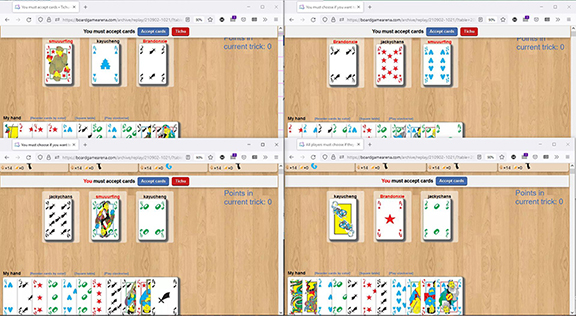 You can also search for other keywords in the log, such as "makes a Tichu/Grand" to find all bets; "made" to find all logs of bets made and not made, etc. Hope this is helpful.
Last edited by NeanderthalMan on 19 September 2021, 15:52, edited 2 times in total.
Top

Thank you for your efforts, NeanderthalMan. I really appreciate it.

One notice: KU leading with 3 instead of JJJQQ in Round 3 doesn't make much sense to me unless you know phenix at your partners hand. This remains unviewed.
Top

smuuurfing wrote: ↑
10 September 2021, 14:32
Thank you for your efforts, NeanderthalMan. I really appreciate it.

One notice: KU leading with 3 instead of JJJQQ in Round 3 doesn't make much sense to me unless you know phenix at your partners hand. This remains unviewed.

I don't see why this sequence is odd or suggests that KU must know partner JC has Phoenix. KU was undoubtedly counting Ks and As and knew it was possible for someone to have a higher full house, especially with Phoenix out there. In the event that an opponent plays over and you can't respond, you want your best cards left. As it turns out, JJJQQ was in fact beaten by your partner's KKK22.

Had the combos played been reversed and KU was left with A3, she'd have to win a singleton lead with A and play 3. However, if opponents have Phoenix they can take the Ace and even if JC plays Dragon, the chances of being able to play the 3 on a single lead and get out first are slim (unless JC has Dog, which KU presumably doesn't know). No matter which was played first, there was some risk that the trick would be won by the opponents and the Tichu set; my guess is KU felt playing 3 first gave more favorable odds.
Top

This is an early catch—not a lot of game history between these two relatively new accounts. These are the only games so far where these two have partnered, in their four games as opponents, the loser appears to have passed low but beneficial cards to the other. Perhaps these two are friends or it's one player using two accounts.

To date this duo has played 18 games together as partners. Both accounts were created on 9/2/2021 and JWORG was initially HB2022 but this was changed a day later. They wasted little time before resorting to apparent collusion to increase their chances of winning.