A new version of Canosa adaptation is online. This new version inclues some rule changes. Alpha and Beta tests brought to light two issues with the original rules. The game authors and myself worked to provide a few adjustements to the game rules and implement them here on BGA.

Meta-statistics demonstrated a small advantage to the first/gold player (52.5% wins out of 451 games as of writing) due to the fact that gold may be 1 or 2 actions ahead of silver but can never be behind. To balance the game even more, gold now only performs a single action on the first turn. Then silver performs two actions and the game continues normally. With this change, gold will now alternate from being 1 action ahead to being 1 action behind.

On some rare occasions, a player may have no action allowed at all. Such a situation can be seen on the screenshot below. Gold to play. The two sailors controled by gold are stuck (they may only move orthogonally towards gold island) and the gold siren can neither move nor perform a ring transfer to/from any of the adjacent sailors. 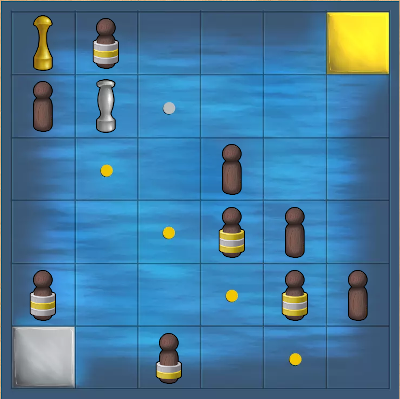 The original rules did not mention this situation, and so the adaptation did... nothing. The game was stuck and players had to abandon it ! Of course this is not an acceptable behaviour, that's why we introduced the following change : if a player has no action allowed on his/her turn, that players loses the game instantly.

A new meta-statistic has been added to track how often this will happen.

This version also brings a few quality of life improvements : As usual, please fill a bug report if you encounter any problem or have a suggestion : https://boardgamearena.com/bugs?game=1434
Top
Post Reply
1 post • Page 1 of 1