5 days ago, we published a new lobby for Board Game Arena. Thanks to your feedback, more than 10 updates have been made since then, with many improvements compared to the initial version.

If you didn't read the first news, we recommend you to read it before this one.

We received A LOT of feedback on the new lobby. Board Game Arena is now a huge website, with a much larger audience than before, and it is REALLY hard to satisfy everyone. So we've not been surprised by the volume of the feedback. And of course as it was new, many of you have been at first disoriented by the new interface. As a consequence you played less on BGA during the 2 first days (-5% to -10%).

But the good news is: we made it! Thanks to your patience, your feedback and our updates, the number of players, tables, games played, waiting time is now back to normal. Yesterday, 21.290 games have been played on BGA, which is a very common number for a Monday. Some others statistics are encouraging: Of course, it is particularly hard to have such a big bang without disturbing you. We worked hard these latest days, to analyse your feedback, to publish updates, and to make sure that everyone of you is comfortable with the new lobby.


So if you have been disoriented by the new lobby in the past few days, here are the main things we did for you:

If you are really nostalgic from the old lobby, you can do the following: Once you have done this, your preferences are saved (for this browser), and the interface is really really close to how it was in the old lobby.

Once you get used to it, you can benefit from the cool new features of this lobby:
This is of course not the end of the story. We still have many things to fix and to upgrade to make this lobby better, and we will continue to push updates in the next days/weeks.

To conclude, I'd like to thank the whole BGA community for your patience and your feedback. Unfortunately, we had a lot of - quite - aggressive feedbacks and comments these past few days, so I'd like to give a special thank you to those of you who took the time to really test the new lobby before giving a feedback, and who explained their situation (and frustrations) in detail instead of just posting a basic "this is awful / I prefer the old one / you are stupid" comment. The feedback from these players has been really helpful to identify what needed to be done, so thanks again.
Top

On one hand, thank you for being responsive.

On the other hand, ye gods, make a 'skip tutorial' button.
Top

I have loved the new lobby. I had problems with the old lobby. The main one being when i wanted to play a game they were hard to catch. I'm old and slow reflexes, and on the old list the games jumped around on the list. I like all the games of the same types being together. There were also many times when several games of the same game had one person. and i would think i wish all the people would join together then we could have a game.Thanks for working so hard making this a great place to play games.
Top

I'm happy about the positive feedback. But very sorry and a bit ashamed too about the negative and even aggressive remarks by some people.
I am sure that the vast and silent majority in this community support that you are doing a marvellous job. Please continue the good work!
Top

As I already said in the other post: congrats guys, you did an excellent job! Proud of ya.
lots of love
Top

You write that "Suggeat player" is now available again. Sorry, but I don't see it, and although I haven't commented previously this is one feature I really miss.
Top 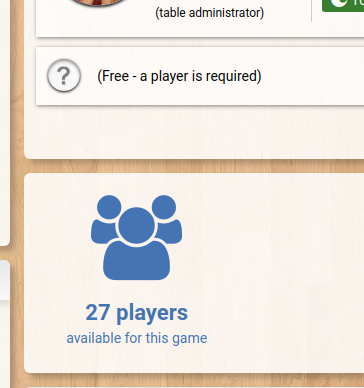 Same with Race for the Galaxy, almost all of the new tables are 2 players only. I'd like to play with 3+ players real time, but no such table are open.

Sorry but we didn't change that.

The only thing we changes is that on the "empty tables" (the ones you are clicking to create new tables), the minimum number of player is displayed (to save space). But it means nothing as when you create your own table, the default number of players at the table is the number of players in your LATEST game played (or by default: the maximum). It was the case before the new lobby and we didn't change that.
Top
Locked
71 posts