One year since the successful Kickstarter campaign and a few awards nominations, it's time to release this game on BGA!

There is a lot to say about such a deep game, so why not check about this nicely detailed text from the publisher?

After the great Chicago Fire of 1871, the brave men and women of Chicago sought to rebuild their once-great city, and rebuild it they did. Over the next 60 years Chicago experienced an economic golden age, making such great progress that it hosted The World's Columbian Exposition in 1893, followed not long after by a celebration of its Century of Progress at The World's Fair in 1933.

Many of the household brands we've come to know and love today had their start in Chicago during this time period; Oscar Mayer, Kraft, Quaker Oats, Nabisco, Swift & Co, Armour & Co, Schwinn Bicycles, Charles Schwab, and many others made a home here in this tall, bold slugger.

In City of the Big Shoulders players take on the roles of entrepreneurs and investors seeking to rebuild Chicago into a city fit for the world stage. In this unique merger of 18xx-style stock manipulation mechanics with euro-style gameplay, players start companies, trade in shares, hire employees, equip their factories, produce goods and sell them to be delivered to homes across the midwest.

Although City of the Big Shoulders features a large amount of strategic depth and rewarding gameplay, it does so in a shorter timeline than is typical of most heavy economic games. Players play just five rounds (also known as decades) in about two and a half hours. Each decade consists of five unique phases: A stock phase where players can buy and sell stock; a building phase where players rebuild the city of Chicago, placing action spaces on the board; an action phase where companies send their partners to make deals across Chicago; an Operating Phase where companies buy resources, produce goods, and ship them out of Chicago; and finally a cleanup phase where the board is set up for the following decade. At the end of the fifth decade, the game ends. Players then exchange shares that they have purchased over the course of the game for cash, are rewarded for any of the public goals they have accomplished over the five decades of play, and tally their money to determine who is Chicago's greatest resident.

CoBS is not a small game, but you could discover that you just enjoy it exactly for what it is: a big game of stock exchange that is not so much about stock exchanges but about worker placement and a unique economic engine.

If you have a thing for that kind of game, we can only recommend you to follow this link, and see by yourself:
https://boardgamearena.com/gamepanel?ga ... shoulders

Sure that Monday releases are not for the faint-hearted.

The BGA Team would like to thank Parallel Games, as well as Raymond Chandler III - the game designer- to let us bring this beautifully strong game on our platform.
All of the development has been done by ggohierroy, our devoted developer who did an incredible job bringing City of The Big Shoulders to you, for your enjoyment.

Now is your time to rule Chicago!

"Chicago is a town, a city that doesn't ever have to measure itself against any other city. Other places have to measure themselves against it. It’s big, it’s outgoing, it’s tough, it’s opinionated, and everybody’s got a story." —Anthony Bourdain.
Top

You know, I had hoped that this was all one massive "Flanders" pun leading up to the release of Unconditional Surrender, a world war game featuring Flanders in Belgium, but apparently you haven't got it out of your system yet.

Have game publishers consented to the fact that this habit means all the discussion following their game announcements are about Ned Flanders © Matt Groening / Fox Broadcasting, instead of being about, for example, the game?
Top

shadowphiar wrote: ↑
08 February 2021, 15:28
Have game publishers consented to the fact that this habit means all the discussion following their game announcements are about Ned Flanders © Matt Groening / Fox Broadcasting, instead of being about, for example, the game?

* I am not affiliated with BGA in anyway
Top

Yeah this is just simply put weird on all accounts. BGA, please stop doing this.

Agreed: Stop the obvious copyright infringement.
And let the games speak for themselves.
Top

So glad to see this leaving Beta! Wonderful game!

While flanders is certainly strange (didn't see him in Res Arcana), the copyright white knights are even more annoying.
Top

I have found a total of 6 Ned Flanders on the last 6 games posted. Please can someone explain why he is popping up all a sudden?
Top

Please, for the love of god, add a means by which players can *completely* pass during the stock purchase phase. Something like "check here, if you don't want to be asked whether you want to sell or purchase stock twice a day for the next two weeks." I honestly have a game that's in its second month. I'd estimate 9/10 calls to take my turn, are me being asked again to pass in the stock phase. I get that there are times you might want back in, but a lot of the time you don't. Thanks
Top

While flanders is certainly strange (didn't see him in Res Arcana), the copyright white knights are even more annoying.
[/quote]

If you look carefully, you'll find him in Res Arcana as well 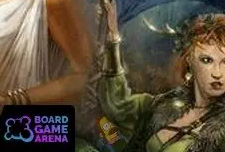