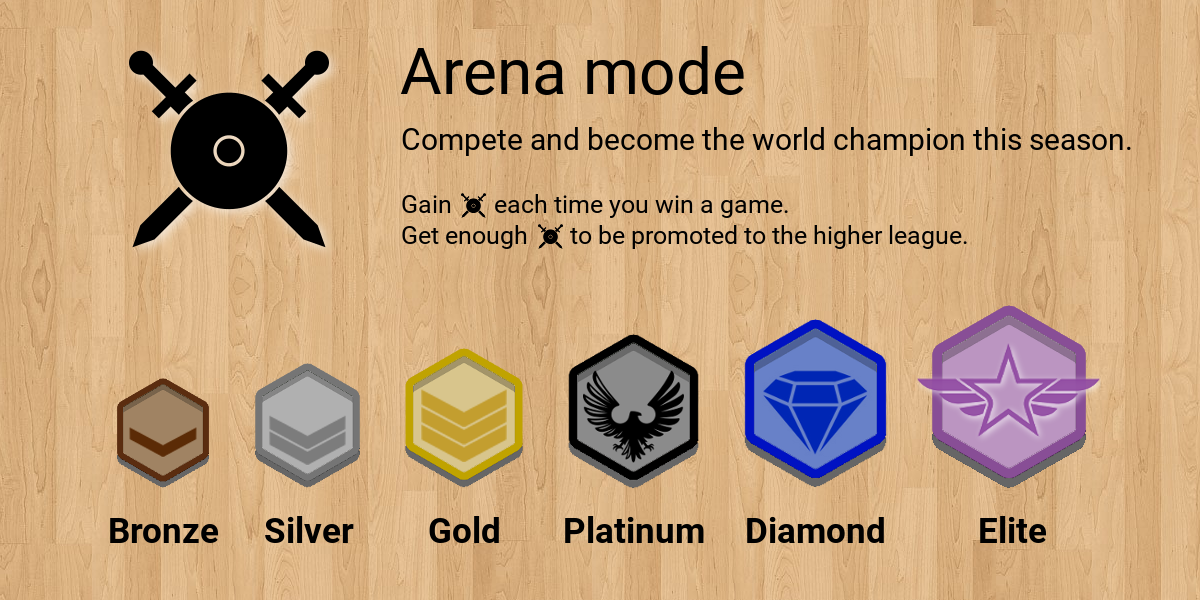 UPDATE (January 24th): Arena mode is back (like it was before).

Following the survey, we are opening back the Arena today.

There is no change compared to before. The reason is this: following the survey, we are working now on a new version of the Arena, with significant changes to the lobby part to fix the following issue:
_ we want to make easy for players from the same leagues to match together.
_ we want to find a way to have a real competition for the least played game.
_ we want to reduce waiting time before Arena games.

We decided to re-open the "old" Arena while working on this new version, because even if it is not perfect a lot of you appreciate it.

We really want to have the best system for the Arena on BGA. It may imply that we had to go through several systems before finding the right one, and this may be confusing for some of you, but we are confident that with our work and your feedback we will build something good here.

Thanks for your patience.


What is Arena Mode?

Arena Mode is a new major competitive mode for all games on Board Game Arena.

Playing Arena Mode, you meet opponents in a competitive spirit, and try to become the new world champion for each game!

How does it work?

Arena mode is seasons based.

A season lasts 3 months, so there are 4 Arena seasons each year.

At the end of a season, top players for each game will be the new BGA world champion (ex: Race for the Galaxy World Champion - 2019 Winter).

What if I do not care about competitive play?

Arena Mode is 100% optional. You can play on BGA using "Simple mode" and never care about it.

Before Arena Mode, it was unclear if a game was "competitive" or not because a lot of players care about their ELO ranking. With "Arena Mode" and "Simple mode", we want to create a place where you can focus on competition and rankings, and a place where you can just play games without caring about any "metagame".

What are the rules of Arena Mode?

Some Arena mode rules may change from one Season to another, so everything that we explain here may change in the future if we see that it doesn't work, if we want to try something different for a given season, and so on.

To access Arena Mode for a game, you first need to reach 100 ELO points. It gives you access to the lower Arena league (Bronze league). You start with 1 Arena point ("Bronze - 1").

When you lose a game, you lose Arena points. However, you cannot go below 0 points.

(Note: If you play a 3+ game, the number of Arena points you get is divided by the number of opponents. So beating 5 opponents from the same league brings you 3 x 5 / 5 = 3 points).

When you reach 10 points, you are promoted to the upper league, with 1 point (ex: "Silver - 1"). You get a corresponding trophy, and you can no longer be relegated for this season.

How many leagues there are?

It depends on the popularity of the game: the most popular a game is, the more leagues there are (and the most difficult it is to reach the top).

What is the "Elite league"?

The most active players for a given game (especially the best ones) may reach the most prestigious league: the Elite league.

In Elite league, the rules are different: each player has an Elite Arena Score (EAS), which works exactly like a standard "ELO rank". Based on this EAS, you get your world rank for this game (ex: 45th) and you can try to become the world champion

What happens at the end of the season?

For each game, the best players will receive the BGA world champion trophies for the season depending on their final rankings.

When a new season starts, everyone is relegated to a lower league (and EAS is reseted).

Why did you introduce this Arena mode?

At first, we wanted to make a clear distinction between competitive and non-competitive mode on BGA. This way, you can play "for fun" or "for competition". Before that, we had some mismatched situations like having beginners at game tables with opponents playing with a very competitive spirit.

But the most important reason is that the previous "competitive play" based on ELO ranking was not satisfactory. The best way to be world #1 with the previous system was to get a very important ELO (sometimes by choosing carefully our opponents) and then to stop playing. We wanted to change that, and to build a system where being the world champion is a real challenge, where you cannot avoid the best opponents and cannot avoid to play.

What is the "competition configuration"?

All players who are playing a game with Arena mode for a given season are playing with exactly the same configuration. This way, the whole Arena tournament is consistent (a debate + poll has been made here to reach this conclusion).

Example: for Kingdomino, during the first season, the Arena configuration will be "2 players, with 7x7 grid and +10/+5 bonuses for Castle on center and full kingdom).

How about the ELO ranking? Is it going to disappear?

ELO ranking is the best and most accurate way to check the level of your opponent. This is an essential feature for an online boardgaming platform, so we won't remove it.

However, ELO is not a good choice to build BGA leaderboards, so leaderboards will be based on the Arena ladder.

Will there be less players for the non-competitive games?

A large part of the work we did on the Arena mode was to make sure it won't happen.

How about turn based games?

Arena mode is both for realtime and turn based games.

When will it be available?

Note that the BETA test may be interrupted at any moment if we see that there is something wrong. We want to make things right, so we prefer to cut the whole thing than providing a bad service.

What is Season zero

The first season (season 0) will be a BETA TEST season.

It will be used to get your feedback on the Arena mode. All the features may not be available during this first season.

This first season will not necessary last 3 months, and it may be "reseted" if needed (ie: all players rank reset).

As this season is a test, the trophies associated with the season won't bring prestige immediately. We may decide to attribute prestige to them later, once we're sure everything is well.

During this first season the Arena mode will probably be far from perfect, so that's why we need your feedback to find how to make it better.
Top

I hope there will be relegation. Otherwise, the players that play more, even if they often lose, will trust the first places...
Top

At first, 2 important things:
_ Arena mode will be optional. If you don't like it, you will be able to ignore it and play on BGA like you used to do.
_ Arena mode is seasons based. It means that we may change the rules from one season to another. So everything we explain here may change in the future if we see that it doesn't work.

There will be no relegation during a given season. However:
_ when a new season starts, everyone will be relegate to a lower league.
_ the Elite league has specific rules, to make sure that the first places are attributed to the best players, and not to the ones that are playing more.
Top

Thank you very much for your answers. I really appreciate your reactivity.
I enjoy this new mode.
Top

Can we also have "elimination mode"? Where if you beat your opponent they are banned for a time determined by prior agreement. Also, I request "playing for pink slips" mode, that one should already be here really.
Top

What about red thumbs? How does it affect the championship?
Top

So when you get relegated at the end of the season will it be just 1 level? If you start at bronze every season just working up to elite is going to take a lot of games even if you are consistently winning.

Will 3+ player games only give points to the winner or will you still discriminate between 2nd and 3rd, 3rd and 4th etc? Also with losing you lose points, would this include 2nd in a 4 player game, or is it like Elo where you gain points from each person you beat? Any ideas on how lost points are determined?

Will matchmaking prevent playing someone more than 2 levels away from you as you can't gain points from them? It is already quite hard to play about 75% of games on here because they just aren't that popular...especially in real time. Turn based might be easier to get a game but has the issue where levels could be 3 or more apart by the time they finish...then what you get 0 points for a win?

You start every new level at 1 point, is this even if you overshoot from the previous level...say you have 9 points in bronze and beat 3 people of the same level, earning you 9 more points for 18 total...does this result in 1 at the next level? Seems the carryover should help start your progression at the next level.

I just hope this doesn't go too far in terms of just giving trophies to those who play the most (especially in the ~75% of games that aren't played very often). For people who play a lot of different games it will be impossible to compete for world championships in all of them, but hopefully it isn't too laborious in terms of games required to be in contention in at least a select few.
Top

We don't know yet. We will experiment season after season to see what would be the best.

Yes. You'll get more Arena points if you are 2nd than 3rd.

This is symmetrical: you lose 3 points when losing against someone from the same league.


sprockitz wrote: ↑
04 September 2019, 19:45
Will matchmaking prevent playing someone more than 2 levels away from you as you can't gain points from them?


sprockitz wrote: ↑
04 September 2019, 19:45
You start every new level at 1 point, is this even if you overshoot from the previous level...say you have 9 points in bronze and beat 3 people of the same level, earning you 9 more points for 18 total...does this result in 1 at the next level?

For games with 3 players and more, you still gain 3 Arena points for a victory. But yes, if you are promoted you still start at 1.


sprockitz wrote: ↑
04 September 2019, 19:45
For people who play a lot of different games it will be impossible to compete for world championships in all of them, but hopefully it isn't too laborious in terms of games required to be in contention in at least a select few.

This is absolutely true new system requires to play way more than the previous one, and rewards the players who play a lot. If you play - really a lot -, even if you are an average player, you can reach the higher leagues. However, if you are a skilled player, you will need way less games to reach the higher leagues, and of course you absolutely need to be a skilled player to reach the top of the Elite league.

But you are right: it will be almost impossible for people who play a lot of different games to compete for ALL their games. But this is not really a problem: you can focus on some games for a given season, and change for the next season.
Top

Arena Mode is 100% optional. You can play on BGA using "Simple mode" and never care about it.